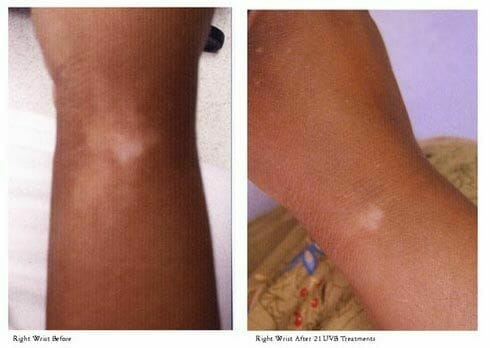 Normally, the color and tone of our skin is determined by melanin, a pigment produced by our skin cells. However, when the skin cells producing melanin are destroyed within the body, the skin starts changing in color, leaving white patches behind, on various parts of the body.

The skin conditioned mentioned above, where white patches start appearing on the skin, is known as Vitiligo. The disease is an autoimmune condition, i.e., it only occurs when the body’s immune system starts working against itself.

With Vitiligo, the immune system starts destroying the skin cells, which are responsible for the production of pigmentation. These skin cells that produce melanin or pigmentation are called melanocytes. As melanocytes are reduced within the body, the skin starts to lose color and becomes white. In some cases; even the hair that grows on the white patches of skin; turns white.

Vitiligo mostly occurs in dark skinned people. The diagnosis is easy due to the clearly visible white patches of skin. However, doctors may conduct some tests and to rule out other possible skin conditions.

Although Vitiligo is not contagious, it can lead to several other medical issues for the patients. The lack of melanin makes the skin more sensitive to sunlight, causing people with Vitiligo to keep their delicate skin covered at all times. Additionally, it can also lead to lack of color in your hair and eyes, as well as a partial hearing loss. People with Vitiligo often have low self-esteem or a lack of confidence, especially if the white skin is present on exposed parts of the body, like hands, face, feet, etc.

Vitiligo can never be cured completely. However, its effects can be reduced with the help of topical treatments, medications, cosmetic surgeries, and light therapies. Out of all of the above treatments, light therapy is perhaps, the easiest and least invasive treatment method.

With the use of ultraviolet rays; and a drug called psoralen that is taken orally; phototherapy can reduce the effects of Vitiligo. The drug makes your skin more responsive to absorbing UV rays and reacts with the rays to target white areas of the skin and darken them once more. Light therapies are generally conducted twice a week for 4 to 6 weeks; each session is of 1 to 30 minutes.

However, as most light therapies today are conducted using full body units that target normal as well as diseased skin areas. So what do you think happens to skin that’s actually healthy? Keeping this aim and your well-being in mind, TheraLight® designed the DuaLight® targeted phototherapy system to perform treatments on the affected areas, keeping healthy skin as healthy as possible.

Posted in Phototherapy, VersaClear, Vitiligo and tagged vitiligo
← The Diagnosis, Effects, and Treatment of PsoriasisTreat Psoriasis with Light Therapy →