Vitiligo Overview
Vitiligo, also called ‘leucoderma’ is a long-term skin condition that causes an area of the skin to lose its color (pigmentation), resulting in white patches to appear on the skin. These patches occur because the cells that make skin pigment, called melanocytes, are destroyed, leaving areas of skin with no pigment at all. Vitiligo can affect skin on any part of the body—even the inside of the mouth and the scalp, possibly affecting hair color—and white patches may grow in size or spread to other parts of the body over time.

Vitiligo is not painful or itchy, and is not contagious or life-threatening, however the appearance of white patches may make a person feel self-conscious, especially if the vitiligo affects skin in visible places such as the face, arms, or legs. Vitiligo is more noticeable in people with a darker skin tone, but because the affected areas of skin are completely devoid of pigment, vitiligo can sometimes be visible even in people with very fair skin. The condition poses no threat to a person’s overall health, and the decision to pursue treatment is a personal one. 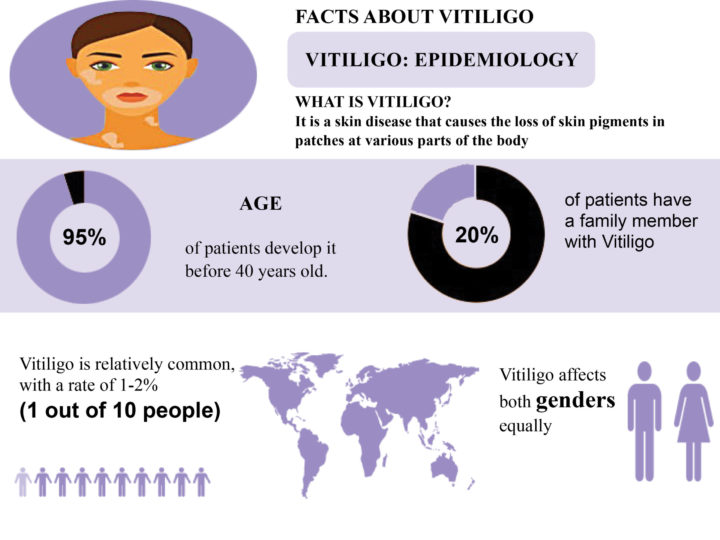 Diagnosis of Vitiligo
If vitiligo is suspected, a dermatologist will do the following:

The main types of vitiligo are: 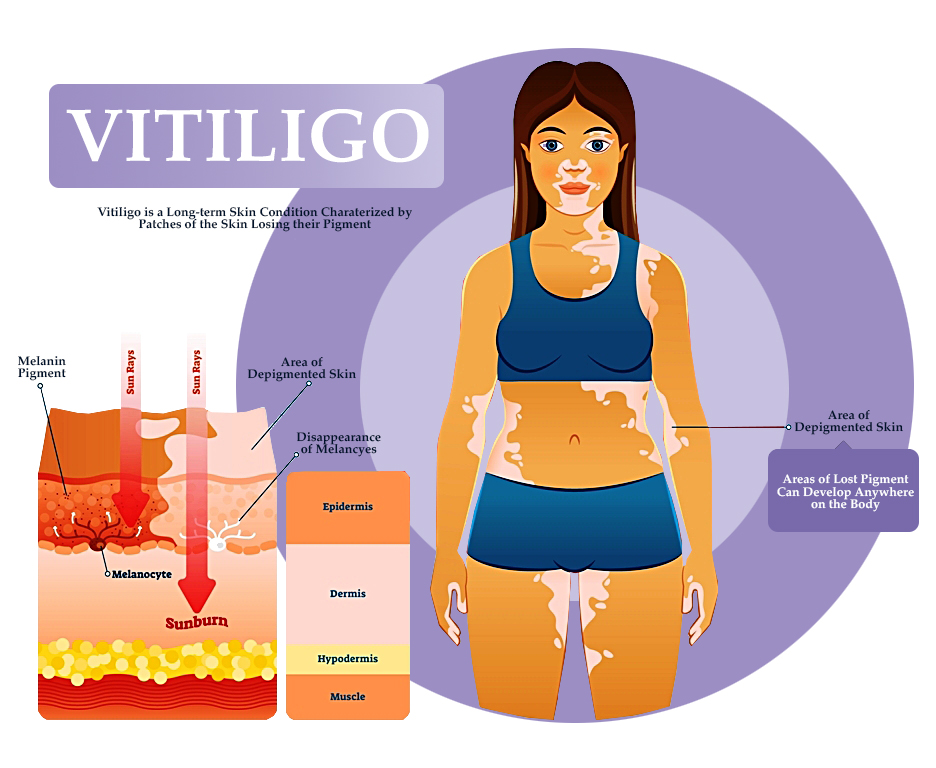 Symptoms of Vitiligo
Vitiligo usually begins with a few small white patches that may gradually spread over the body over the course of several months. Vitiligo typically begins on the hands, forearms, feet, and face but can develop on any part of the body, including the mucous membranes (moist lining of the mouth, nose, genital, and rectal areas), the eyes, and inner ears.

Sometimes the larger patches continue to widen and spread, but usually they stay in the same place for years. The location of smaller macules shifts and changes over time, as certain areas of skin lose and regain their pigments. Vitiligo varies in the amount of skin affected, with some patients experiencing few depigmented areas and others with widespread loss of skin color.

Causes of Vitiligo
Although the causes of vitiligo aren’t completely understood, there are a number of different theories:

Autoimmune Disorder
People with vitiligo may be more likely to get other autoimmune diseases (in which the body’s immune system causes it to attack itself), such as hypothyroidism, diabetes, pernicious anemia, Addison’s disease, and alopecia areata. Also, people with autoimmune diseases are more at risk for developing vitiligo. Being under a dermatologist’s care can help find these diseases earlier when treatment can be more effective.

Genetic Factors
Certain factors that may increase the chance of getting vitiligo can be inherited. About 30% of vitiligo cases run in families.

Neurogenic Factors
A substance that is toxic to melanocytes may be released at nerve endings in the skin.

Self-Destruction
A defect in the melanocytes causes them to destroy themselves.

Stress
Vitiligo may also be triggered by certain events, such as physical or emotional stress.

Sun Damage
Skin damage, such as severe sunburn or cuts, known as the Koebner response, or exposure to certain chemicals, for example, at work.

Combination Factors
Because none of the explanations seem to completely account for the condition, it’s possible that a combination of these factors is responsible for vitiligo.  Vitiligo is not caused by an infection and you cannot catch it from someone else who has it.

Complications
Although vitiligo is not painful and is mainly a cosmetic condition, people with vitiligo may experience a variety of problems:

Hearing Loss
The inner ear contains melanocytes, the cells that give our skin and other parts of the body color. If the body attacks these cells in the ear, hearing loss can occur. It is estimated that between 12% and 38% of people with vitiligo have some hearing loss. Most people are unaware that they have hearing loss. Seeing a doctor who knows about vitiligo can help find hearing loss.

Eyes
Some people with vitiligo develop changes in their vision and abnormal tear production.  They may have some abnormalities in their retinas (the inner layer of the eye that contains light-sensitive cells) and some variation of color in their irises (the colored part of the eye). In some cases, there is some inflammation of the retina or iris, but vision is usually not affected. If your dermatologist sees signs of this, you will be referred to an eye doctor. These changes are best treated early.

Anxiety and Depression
Although vitiligo is usually not harmful medically and causes no physical pain, its emotional and psychological effects can be significant. Regardless of a person’s race and culture, white patches of vitiligo can cause emotional stress, particularly if the condition develops on visible areas of the body (such as the face, hands, arms, and feet) or on the genitals. Adolescents, who are often particularly concerned about their appearance, can be devastated by widespread vitiligo. Often, those suffering from vitiligo feel embarrassed, ashamed, depressed, or worried about how others will react.

Researchers have found that many people who have vitiligo often feel anxious and embarrassed around others. People often stare and make rude remarks. Some people are obviously frightened. Facing this day in and day out can take a toll on a person’s self-image. Low self-esteem can develop, which can lead to depression.

Sun
Because they lack melanocytes, macules are more sensitive to sunlight than the rest of the skin, so they will burn rather than tan. It is important to protect yourself against the sun with measures like using sunscreen, staying out of the sun during the hours that it is strongest, and wearing protective clothing.

Skin
Some people with vitiligo have reported having itchy skin sometimes, including before the depigmentation starts.

Treatment Choices
The choice of treatment depends on the  age, how much skin is involved and where, how quickly the disease is progressing, and how it's affecting one’s life. The goal of most treatments is to restore lost skin color.

Resources for Vitiligo
There are numerous resources to provide information from various associations, in addition to Supprt Groups found in most communities.