Targeted phototherapy has a significant number of advantages, especially for conditions, like vitiligo. Vitiligo are white patches on a person’s skin caused by a lack of pigment on those areas. Here’s an example of how it might look:

Vitiligo is an autoimmune condition and is not contagious nor can be cured. Having an autoimmune condition means skin cells aren’t generating normally as others might be. In the case of vitiligo, melanocytes, which makes the melanin or your skin’s pigments, aren’t as generous as they should be. The white patches are areas, where skin pigments were missed.

In the past, PUVA, which stands for psoralen and UVA, was the first phototherapy treatment for vitiligo. Psoralen is a compound found in plants and used as a mutagen to make the skin more sensitive and effective for ultraviolet (UVA) radiation.

In short, PUVA is very effective in reducing abnormal skin cells. However, it does have some side effects, including the risk of cancer, burning, liver damage, and even cataracts.

A targeted phototherapy system helps keep the areas that are not affected from being exposed to the intensity of ultraviolet radiation. Some might say it’s tedious, but it can also benefit the individual with the condition in many ways, including the elimination of unnecessary risks.

The following will help give you an idea of how the DuaLight® system works on the skin: 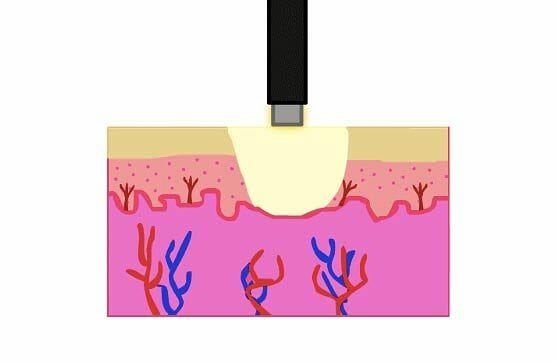 When light hits the affected area, the dead skin cells come alive and attract other skin cells around. The healthier cells gather into the white areas, causing melanin to spread more evenly throughout the skin.

Posted in Conditions, Phototherapy, Vitiligo and tagged targeted phototherapy, vitiligo
← The Benefits of Light Therapy According to the National Psoriasis FoundationTop 8 Medical Ways Phototherapy Can Be Used →