Many of us take for granted how easy life can be. Not all of us have to struggle with things such as disease and disorders. For those that do, life feels very different and can be a struggle.

Most people have never heard or even met anyone with vitiligo, but it’s actually more common than you might realize. It’s a skin disorder that could be socially uncomfortable for those who have it, simply because of the obvious patches of white skin found on the person(s) who has it. Vitiligo destroys the cells in the skin that create color and can appear at any part of the body, including the scalp.

10 Inspiring Stories from People with Vitiligo

It’s easy to find those who struggle with the disorder, who wouldn’t? A quick Google search leads you to people begging for ways to feel secure with what’s happening across their body. One young boy even said he couldn’t stand how people looked at him and he hoped that someday, a girl would choose him as a husband despite his condition.

If you struggle with this disorder or even if you don’t, here is a little perspective and maybe even a dash of inspiration from those who have vitiligo and are living life to the fullest.

Image credit: Winnie Harlow
Have you ever heard of Winnie Harlow? She’s famous for appearing on America’s Next Top Model. She rocks her disorder with a confidence and flair that would make anyone envious. It almost makes you wish you were as unique as her when you browse her photos.

Meet Domonique. He’s a young man with vitiligo but doesn’t mind the camera at all. In fact, he uses his unique look to pose for the camera quite often. His Instagram is full of exciting things including poses with celebrities.

Photo credit: Romance Meets Life
Gaone Tlhong is a huge inspiration because she is proof that love knows no bounds and romance is just as lively no matter what skin you’re in.
Lee Thomas is a well-known TV reporter for Fox 2. He refers to his disorder as a journey and never likes to call it a struggle. He not only is an anchor but he’s a motivational speaker with a long list of things he’s recognized for.

A photographer named Julie Kaczorowska gained this disorder a little later in life. Instead of letting it get her down, she connected with people all over the world and used her photography skills to inspire those with the disorder to love themselves.

Michaela was a young girl with a dream but felt held back from that dream because of her disorder. That is until she found her courage and is now traveling all over dancing her heart out.

April Star is only 10-years-old and wants to change the name of beauty. So much so, she has already launched a modeling career as a child model to prove skin doesn’t matter.

Carlene John is a young woman who tried to fight her disorder for many years. She would spend a long time applying makeup to hide the marks. One day, she finally let loose and is now a successful model showing the world how it’s done. 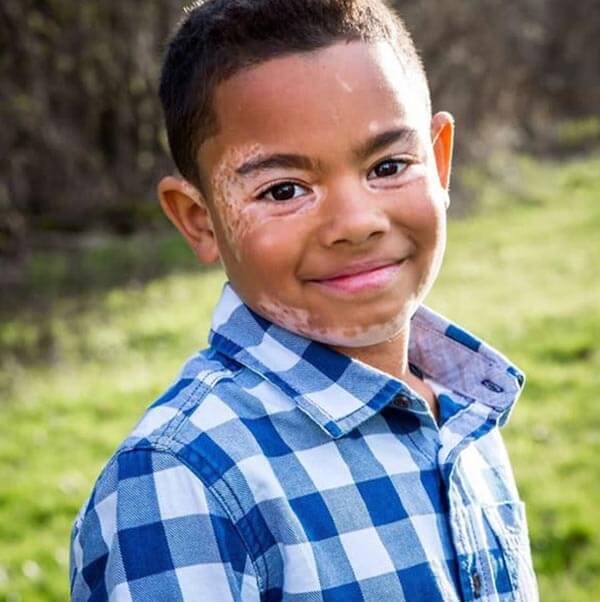 Photo credit: themindcircle
Carter Blanchard was just a little boy who just wanted to hide when his condition started in. That is, until he got a furry friend who was just like him.

Lauren Elyse is a makeup artist who decided to take her disorder and turn it into art. She couldn’t be more of an inspiration.

Every single one of these people use their disorder as a way to stand out in a good way rather than stick out like a sore thumb. They have wowed the world with their confidence. Disorder or not, most of us could take a page from their book and be better for it.

Posted in Phototherapy, Vitiligo and tagged people with vitiligo, vitiligo
← How Phototherapy Works on PsoriasisWhite Patches on Skin Can Be Life Altering →